Someone remarked this week that is very easy to get despondent when you're doing a restoration project. They're absolutely right and the irony is that last week I'd posted that I'd been listening to the song "things can only get better" whilst taking photos of the hard work ahead of me. What is so ironic about that? Well, this week I looked a little further up the framework and discovered that at least one pillar has completely corroded away. The floor above is bearing down on the lower part of the pillar and forcing it outwards. *deep sigh* This now becomes a priority to deal with as a strong and sturdy structure is essential to the bus. I also discovered corroded supports and missing brackets (completely corroded away) for the nearside floorboards. Some of the boards have also perished and I know that when they come out, they are going to flake away into kindling. But why stop there? What is left of the platform frame was getting worse all the time. So I decided to remove the stanchion to see just how bad it was and it nearly fell off. One stubborn bracket attached to (what remains of) the riser refused to let go of the 20kg platform frame and had to be cut, levered and twisted (to weaken it) away. At least it won't fall off now. The more I do, the worse the bus looks. But it's like a cancer that needs to be cut out. 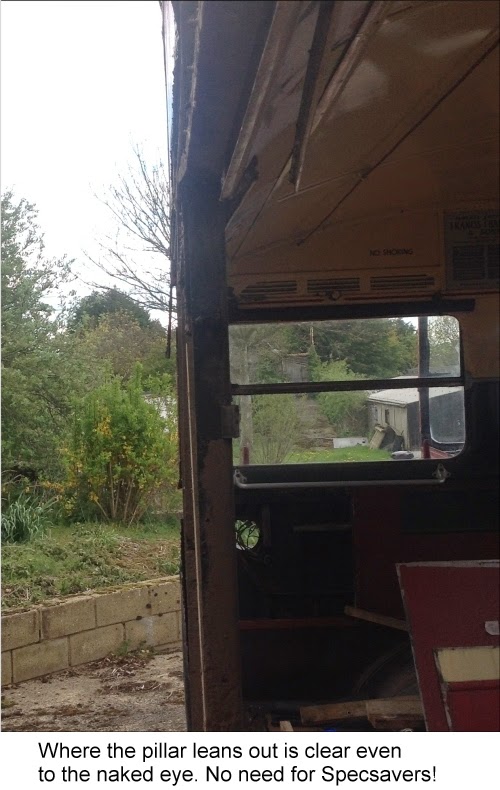 On a positive note I've had some useful and enlightening conversations this week. I have determined that the reason for the air taking so long to build up (air compressor builds up air pressure once over idling speed, which is needed for gear selection as well as brakes - no air pressure, no moving - the successful signs are that the stop flag rises, the warning light goes out and you can hear the hiss when you hit the operator or brake pedals). On cold days, or when the bus has got cold (indoors in the dark with a concrete floor is not the warmest of places) it has been taking nearly 30 minutes to achieve air pressure. The pressure does not leak, as once it is up it can stay up for hours or nearly all night (I vaguely remember those days). On Wednesday it took half an hour to get sufficient air pressure. On Friday somebody else had the same issue as they needed to move her. But when I went in on Saturday afternoon, it took less than a minute (even though it had been the previous day since being moved). So this turns out to most likely be a sticky valve on the gearbox and I'm told that some RTs are like this and others aren't and that was the same when they were in service. The advice I have been given is to try pumping the operator and brake pedals when starting as this can help to 'unstick' the offending valve. I'd really like to get it sorted once and for all, but in the meantime I'll try that and see if it helps. At the moment it's costing me a fortune to start it up just to pull outside. I will post some time in the future when I've had a chance to see if that works.
I haven't got as much done this week as I'd like to have. I had a puncture (not on the bus) this week which required breakdown recovery to come out. The following day the repair failed, so they had to come out again. Breakdown recovery eats into your time so much and 'fun' stuff is what has to suffer. I'm also trying to plan ahead to source:
Most importantly this week are the conversations that I have had and the people who I have met. I went to the Watford Running Day and talked with some great people who had plenty of time for me and it gave me plenty to move forward with. I didn't take the bus (it's properly off the road right now) but did catch RT604 there. The livery is not my favourite (I'm a red bus kinda guy) but I was scouring the inside to see what goes where and being anal and photographing bracelet positions, wood trim and tread placement. Geek stuff, but necessary for when things go back (everything I am removing is tediously being labelled, but a lot of things were already removed (some of it ripped off like the Hulk had previously been helping with restoration, some of it twisted, levered and cut off). These jigsaw pieces need to be identified, ascertain whether they all came off this bus and labeling. So now I'm bloody csi. 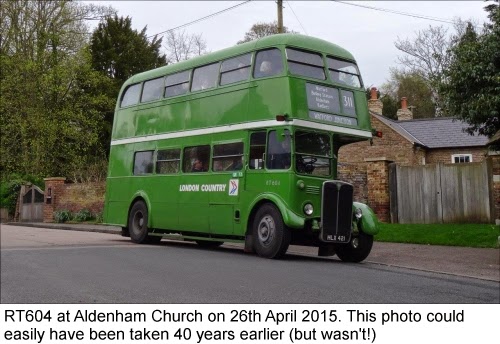