The restoration started in March 2015, with the first step being to move to new under cover premises where work on the bus can be done. The previous landlord was a good one, but did not want restoration to take place there, which is perfectly reasonable. 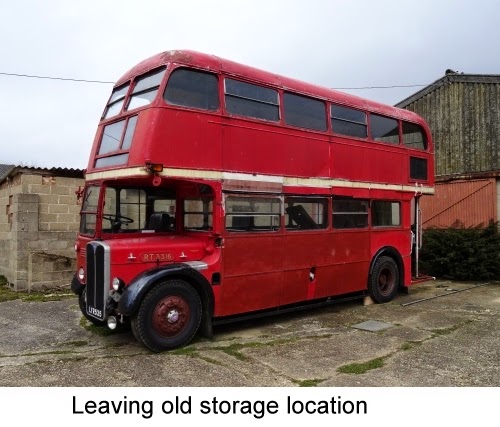 In preparing for the move, one of the batteries exploded. Yes, exploded - I'm not exaggerating. A build up of gas ignited when we went to start her up. I bought two new batteries from Tayna, fitted them (I made that sound a lot more simple than it actually was). The move was simple and she now lives in a secure under cover unit not far from Watford. 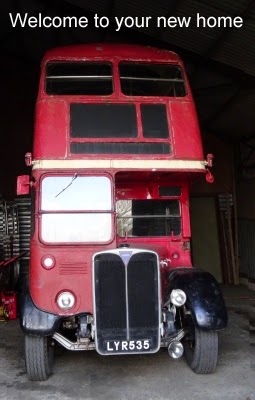 The first thing we did was to assess the condition of the riser. The riser sits at the rear end of the lower saloon, where you step up from the platform into the seating area downstairs. The riser sits on the end of the chassis and brackets are attached to it to support the platform. There is also a battery riser that bolts to the riser and extends rearward to support the battery bay beneath the stairs and attachs to the back of the bus at the lower most point. The riser is a major job on an RT and many believe that if it is knackered, the bus is not worth saving. Close inspection has determined that the riser on RT3316 is (for want of a better word), knackered. The inspection revealed that this bus has been 'refurbished', probably back in the nineties. However, it was not done well. It may have looked okay, but it was a cowboy job. Quickly I began to realise that rusted metal (for the most part) had been plated over, with no rust treatment on the original rusted piece. Thus creating a hidden environment for water/moisture to get trapped and the rust to spread even further, in turn creating even more moisture that then causes other areas of the bus to rust, that would not normally be so bad e.g. Behind the foot wells upstairs. When the rear panels of the bus were removed, it looked as though the end of the battery riser was in a remarkably good condition. But when the bottom step was taken out to allow access to fix the platform, it was then found that a piece had been added over the top of it, simply to cover it up. 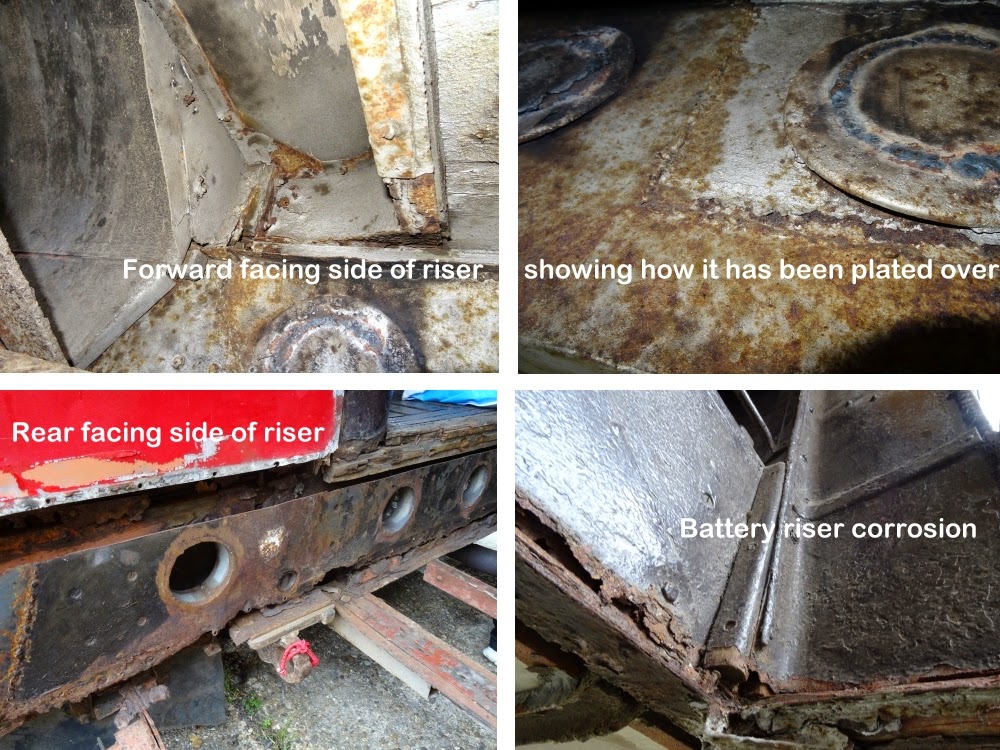 I reached out to the bus preservation community for advice and got put in touch with somebody who had replaced a riser on an RT seven years ago. After speaking with someone involved with that (and finding that their experience was a good one), I contacted the company who made the riser and they advised that they could do another and would work out some pricing for me. But more about that later. 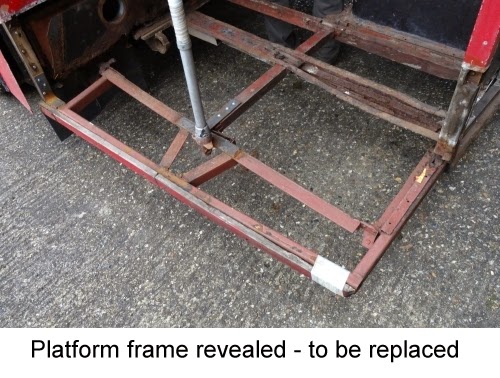 I also chatted with someone else about making a riser from scratch. An RSG is not an option, not only because the size would not be right (and the panel that should cover it would not fit back in place) or that it wouldn't slope the way that the riser does to allow water (rain) to run down off of the platform, or even that it would be too heavy, but more importantly (as was pointed out to me) it would be too rigid and would result in stress fractures elsewhere (such as the chassis). The riser was designed to flex a bit and absorb some of the stresses applied by bumpy roads (and we certainly have enough of them nowadays).
There were a couple of options on the table and things do not tend to move very quickly in the bus preservation / restoration world (possibly because many people in it have other full time commitments). So the next thing was to crack on with assessing the electrics.

The indicators had not worked since day one. I had seen them working in a video taken by the previous owner just a couple of months before I had bought the bus, but was told that they had been intermittent and so knew that they needed attention. I had tried to resolve the issue last year myself, but I was getting strange results from testing the continuity and voltage. Dave Simmons in Tilsworth helped me out with an RT wiring diagram and I spent many hours deciphering it and ended up reproducing my own simplified version (I will add a link here later to a download of it) which included just the indicator circuits and components. Note that I'm talking about the flashing directional indicators, as it took me a while to realize that 'indicators' was the term London Transport used in the day for destination displays.

Enter Ken. Ken contacted me last year with his story about when he drove RT3316 at Bolebroke Castle on the bus driving experience that she used to perform. It was fascinating to hear about it (and he is not the first person that I have spoken to who went to Bolebroke to drive her). Ken has since got involved with the restoration and we now work as a team. One of his great attributes is his ability to renovate items, so he has taken on the task of doing so with many of the items that can be removed to work on, including:

He has a lot of work there, but I know that he will produce spectacular results. So all those items came off the bus and she is most definitely no longer roadworthy.

Next came tracing the electrics. Ken took the indicator switch away and found that it was cutting out intermittently. He did his magic and it came back repaired. We then found that there were bad contacts at various points (nearside front indicator ear, bulb holder), terminal block in the speedo unit, indicator switch connecting terminals, repeater unit (behind drivers head) and terminal block inside the rear light unit. Pretty much everywhere that there is a connection! Between us, we managed to fix them all and ended up with fully functional directional indicators! So then we took them off (we now know they work, but we have lots of work to do and will add those final pieces towards the end.

We got all the external lights working. We chased out the rear light unit wiring (it doesn't match the wiring diagram colour scheme or identification markings, but I expected that (so many people have worked on them over the years and once the bus was no longer serviced at Aldenham, variations were introduced).

We then got all the internal lights working, less the bulbs that are missing or broken. I'm working on sourcing replacements, but that is not as easy as it sounds.

A number of other electrics have been tested and there is some work to be done in-place, but nothing major - it's all bad contacts - no major rewiring needed!

Then the seat frames needed to be removed in the lower saloon. This is necessary to get access to the side panels, both internal and external. We will need to address each and every bay and resolve issues as we work our way around the bus (also a clean and open working space is essential to expediency and success). Removing the seats was not straightforward. The retaining bolts were all badly rusted, as were the screws into the floor. This was the point that I realized that Whitworth 3/16 tools are the most useful ones when stripping an RT. Most of the bolts used are that particular size and metric and imperial just don't cut it. Imperial 7/16 is the closest match, but the socket has to be carefully hammered into place over the bolt head as it is just fractionally too small. Thankfully I'd robbed my mother's old spanners (with her consent - she didn't even know where they had come from, let alone had any use for them) and had a Whitworth 3/16 spanner. After the first couple of seat frames I was able to pick up the pace and got through the rest of them. 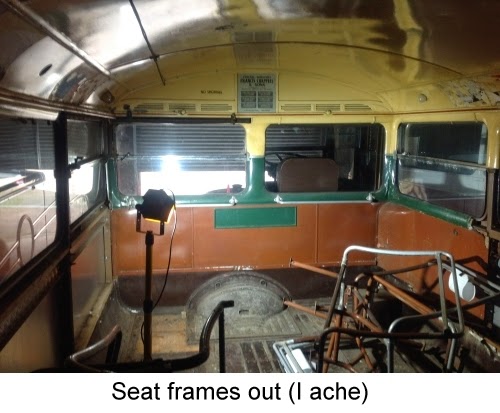 Everything else had been moved upstairs for storage at this point. The seats need reupholstering and new foam, but I have had some discussions in the background and that will progress in the coming months, once the right deal with the right supplier has been made (the material is on back order anyway).

That brings us up to this current week, which I will cover in the next post.