I haven't posted in a couple of weeks - not because of a lack of things to post about, but because I have been too busy. Many hours have been put in since my last update. This has been a period of further stripping down. New platform and battery risers are being made and preparation for them is being undertaken. The platform riser sits on top of the end of the chassis, connects to pillars at either side that run vertically, has the end of the lower saloon gangway on top of it and has brackets connected to the front face, which then go underneath the riser to support the platform. The battery riser connects to the platform riser at a ninety degree angle and connects to the rearmost part of the bus (at the bottom) and provides support for the battery compartment beneath the under stairs compartment (the buggy hole). 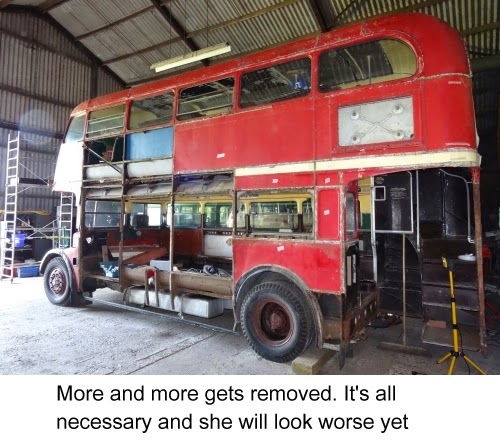 Lots of panels need to be removed to gain clear access to the risers. The batteries have been moved to a new temporary home on a wooden platform that I constructed, that wedges on the offside bench seat frame. This allows us to move the bus around (e.g. outside in the sun / daylight) whilst continuing to remove the battery compartment and other connecting pieces. Grab rails and edging has been taken off, along with some of the floor slats. I keep thinking of "The Curious Case of Benjamin Button" where he shrank as he got older until he completely shriveled away. The bus is looking a bit like that right now and there is even more to come off yet. It's like a dentist doing a filling - all the bad stuff has to come out and prep for adding new.

I also has a trip to Ensign this week. I obtained some Routemaster moquette (seat covering) and arranged with Ensign to swap it for RT moquette. This will be used for seat refurbishment as many had perished over the years, in particular those exposed to direct sunlight whilst the bus was stored in the same position outdoors. Whilst it was stored outdoors last year in my ownership, it was covered with a very large heavy duty tarpaulin, despite the fact that the damage was already done. When the cover was not on the bus, the seat bases and backs were removed and inverted and for some time they were also covered inside the bus. The trip to Ensign allowed for me to see the historic vehicles that they have there. I was in RT heaven! 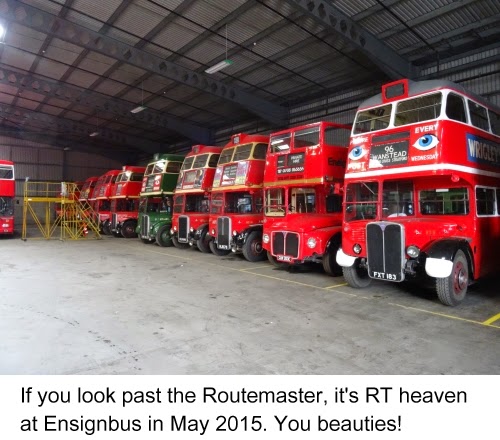 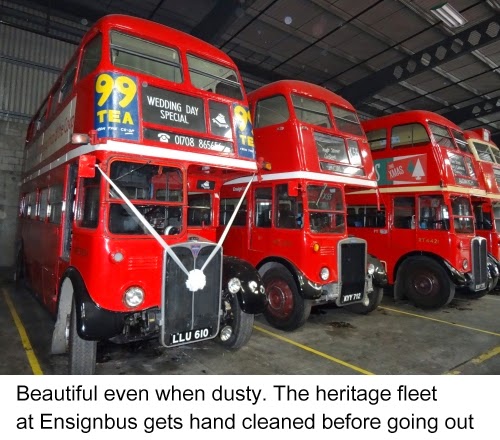 Also at Ensign was RT3316's former stable mate, RT4599 (ST2001). This bus remains stored with no plans to restore it at the present time - vehicles that get restored at Ensign, do so because of their desirability when it comes to private hire work. Unfortunately that's the way it is when it's a business and whilst they'd love to just go ahead and restore all of them, some may take a considerable amount of time to get done and may end up not getting done at all, but act as a donor for spares for the others. 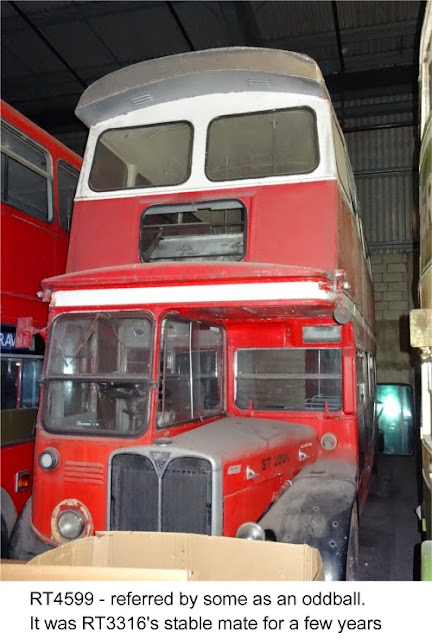 With the longer evenings and warmer weather, there is more opportunity to crack on with getting the bus restored. It's quite therapeutic but I do like some music to egg me on. Fortunately in a former lifetime I was a pucker DJ (innit?), so I have sorted myself out with some appropriate tunes. I like non-stop music that blends well and for this kind of thing I choose to listen to some upbeat classic tunes rather than banging house. The likes of Queen, Eric Clapton, Radiohead, Coldplay - you get the drift. I believe that I have found a way to share that with you so that you can also enjoy my mixes whilst doing what you do (for me right now it's prising panels off and pulling rusty screws out). The following link should direct you to my (RT3316's) One Drive, where you can listen to or download them. As it's Microsoft's Cloud it should be able to cope with everyone connected to it at the same time:
http://1drv.ms/1LECH4L
There are 6 mixes there that are about an hour and a half in length (each). That gives you about 9 hours of music to sing along badly to and if you need more than that, you need to get a life!
I hope you enjoy the music. I'll add some more at a later time when I get bored of this lot! 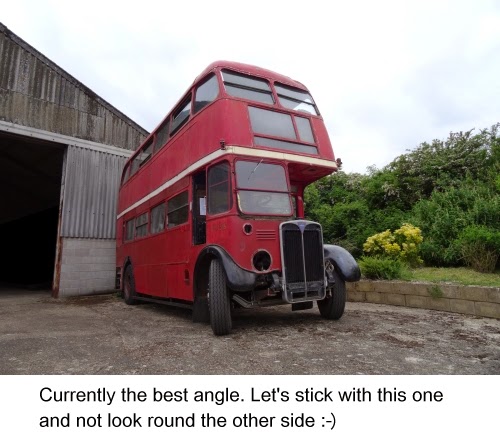 Having said that, I consulted further with various sources of information including Dave Simmons at Tilsworth with regards to the bowing of the nearside pillars and received advice on how the pillar was not actually one piece but was separate upper and lower deck pillars connected by two brackets. One bracket extends from the lower pillar across (above) the lower saloon ceiling. This ceiling is attached to the lower edge of this bracket. The other bracket is bolted to the lower one and sits above it, extending from the upper deck pillar inwards, providing a curved support for the upper saloon foot well panels to connect to. These smaller brackets have corroded. There is also a separate mild steel curved panel that sweeps downwards and is intended to act as an additional seal against water ingress. It didn't work as it is corroded along the whole length. Having discussed its usefulness (it's not structural), I've decided not to replace that piece.[edited: I've had further discussion with regards to this - known as the inter roof can't rail plate - and have been told that it is very important and that it supports the upper saloon floor and without it, the floor will sag. I am still unconvinced, partly due to the diagrams (it connects on the outer edge to a piece of wood, which can't possibly be keeping the upper saloon floor in place), partly due to all the other more significant pieces that support the floor and also because I don't have any can't rail plates now and upstairs is definitely still there. You use your own judgement and like everything else that I write, don't take what I say as gospel. I do make mistakes.] 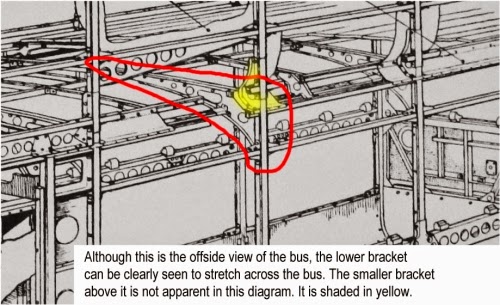 I was able to secure what is possibly the last rear window pan for an RT still in existence (that is not fitted to a bus). It is not new and needs some repair, but it is just minor corrosion around the edges. The actual pan is in really good condition. That's really good news as what was on the bus was a mish mash of odd pieces that was previously bonded together with filler, putty and God knows what. It was a mess and was purely cosmetic external surfaces, that were not very good. It would have been impossible to create a watertight surround from what I had. I now have all the components to construct a proper rear window on the platform. I also measured this one up and have prepared a drawing so that it can be possible for further rear window pans to be made up, as needed by other RT owners in the future.
The seat frames from downstairs have now moved upstairs for storage whilst the lower saloon is tackled. To gain access to the pillars and their brackets, a panel has been removed above the can't rail. This panel is the length of two bays, so it is quite a big one. Although it was intended to stick to one bay at a time, we're having to remove additional panels to get visibility and access to neighbouring areas. It has to be done. 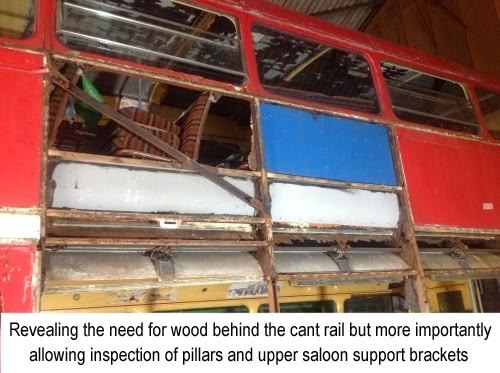 Some of the removed parts will be put back soon. Ken and Barry have constructed a superb bracket arrangement for the waist rails. These are not original brackets but are specially constructed to brace and provide support for the eroded pillars, whilst being stronger than the original waist rail brackets, they will be bolted to the pillars and to the waist rails, but will only be marginally heavier than the parts which they replace. In order to achieve this, a tool was made to press the new brackets to fit the replacement waist rails (allowing the securing bolts to be recessed as per the original design). I've seen the new parts in pre-assembly mode. Photos will be added in the future when they are assembled. 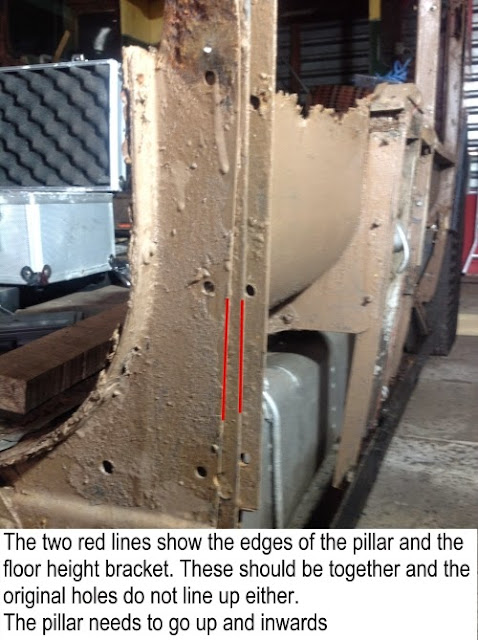 However, before they go in, we need to take up the floor in the lower saloon (probably most of it). The channel along the nearside edge has rusted away and there is nothing left of it at the rearmost part. Thus, the floor on the nearside (ahead of the rear wheel arch), is not supported. It simply stretches across the central floor support channels. At the edges of the floor boards, the wood is rotten (dry and flaky). From below the floor doesn't look bad, but some of the edges of the floor boards have water in down the outside of the bus, get in around the can't rail and window pans, subsequently running down the hidden side of the interior skin and ending up on the edges of the floor boards.
The bus continues to start and get full air pressure capability within two minutes - now that the user has had remedial action! 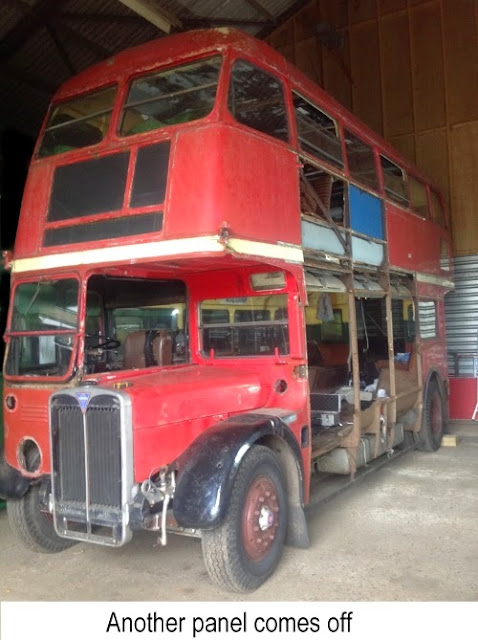 There's been lots going on this week; not all of it I can post as I don't want to jinx things. When those things happen (and they're quite significant), I will update the blog.
One big thing this week is that a new platform riser and new battery riser have been ordered. After a lot of research, e-mail conversations, messaging and phone calls, I have determined that the best way forward is to replace both of those and I got a supplier who had previously done this and was prepared to do it again. In fact, new technology has made it easier (and thus cheaper) to repeat. I am happy with the price - more in a month or so, when it will be due to arrive. There's lots to do in readiness - obviously the old ones need to come out (that will happen last), but before then, all the other stuff that obscures or sits upon these pieces has to come off. The old platform frame has gone (whilst it was no good, that didn't mean that it came off easily!) along with the stanchion (the bolt at the top is beneath the 'cuddle seat', (the seat at the back of the upper saloon). Handrails have been / are being removed. The seat frames from downstairs have now gone upstairs for storage purposes and the lower saloon is principally empty. We're working on the nearside ironwork and sorting out the issue with the pillars. 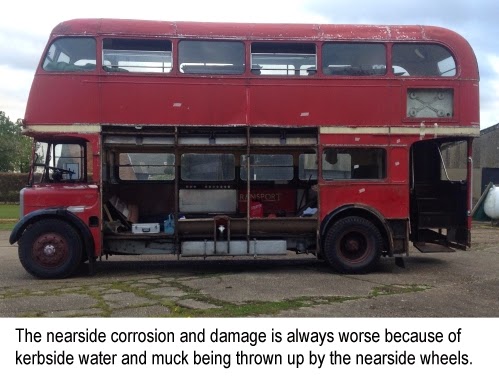 The cold starting issue appears to have been resolved. That would seem to have been user error. I will add that detail as a separate piece on the website and will link back here when it is done. 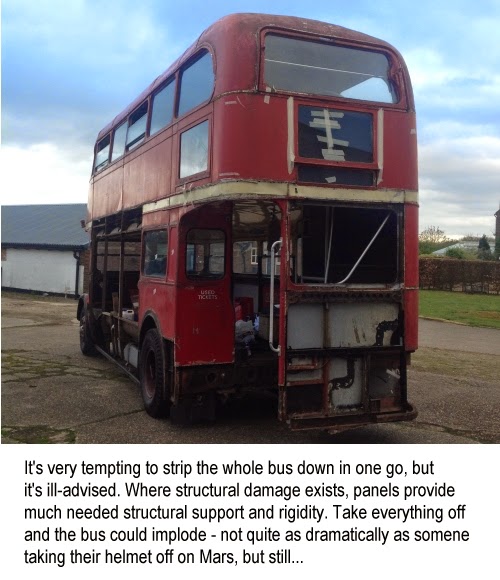 Once again she is looking worse. But I have the vision to see past this and crack on with the tasks at hand. I generally have a plan and agenda every time I go to the bus and when I get there it changes. It has to because new things arise that have a higher priority, perhaps because they are more important or typically because they have an impact on something else or a lead time / knock-on effect. 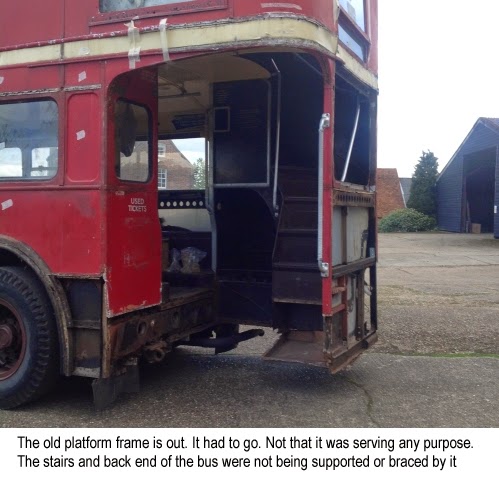 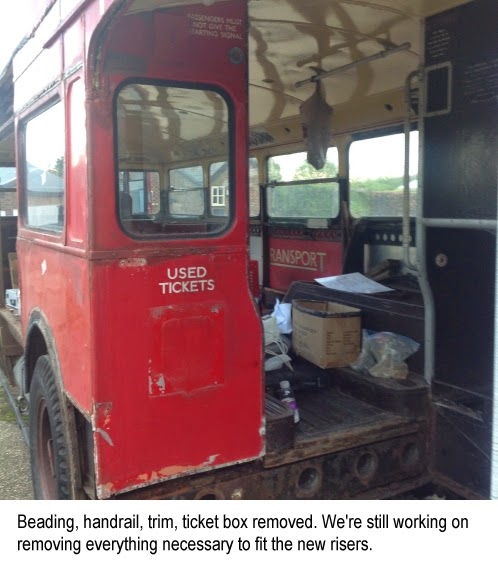 I've been surprised this week to find that I am able to source most things that I need from one place or another and not at inflated prices. The future is looking so bright, I gotta wear shades.