Wow, I can’t believe it has only been a week since I last provided an update on progress, although I have been saying that things will get busier now.
It is time to remove the steering wheel and get it refurbished. The coating is cracked in places and has electrical tape wound around it to stop fingers getting sliced, but that has severely affected the driving experience. The wheel is held in place by a single bolt and a small slither of metal recesses into a groove in the column and in the wheel. Four bolts connected from the underside of the wheel that can connect to a wheel ‘pusher’. I don’t have one, so I set about making one. Using a strong thick piece of hardened steel, I drilled out the holes for the four bolts and another in the centre, which was tapped to accept a bolt. The pusher lined up near perfectly on the first attempt and I tightened the bolt against the steering column with a ratchet handle. As I tightened the bolt, the thread got chewed away on the bolt and I realised that it had been a waste of time. Plan B involved a copious amount of WD40 and an obscene amount of heat. Heat had been tried in the first instance but had been fruitless. This time the heat gun was placed directly over the column, suspended by cords and cable and allowed to run for at least ten minutes until the end of the steering column was glowing red and the WD40 was beginning to evapourate. When I returned to the wheel with a crowbar to lever and a sledgehammer to ‘persuade’, it only needed one light tap and the wheel was off. The metal retaining piece remained connected in the groove of the column. 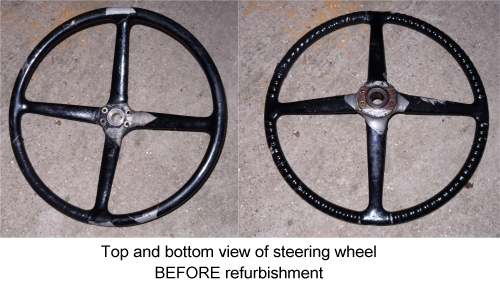 With the wheel off, attention was turned to the rear destination window. In need of some TLC, it needed to be removed. The cherry picker is now proving to be invaluable, providing a safe, sturdy platform to work from that can be easily moved around the bus and adjusted up or down at the press of one button or the other. The trim was prised off the rear destination box window, followed by the surrounding panel, the panel below, the curved corner panels on the nearside and the offside, exposing the whole destination frame and allowing removal of the lower part of the destination panel. The glass in the main window was broken, so had to be extricated with a few taps of a hammer – a new piece will be needed anyway.
The nearside destination window came next. The surrounding panel was not original and was connected on the inside of the box with rusty screws. The panel could not be saved and was sacrificed in aid of ensuring that the box itself remained intact, showing few signs of decay. The right decision was made. With a couple of offside rear panel removed, the tail end of the bus looks quite different now (and better by getting back to the root of the corrosion. It is now possible to see what needs to be done underneath and allow access to do it. 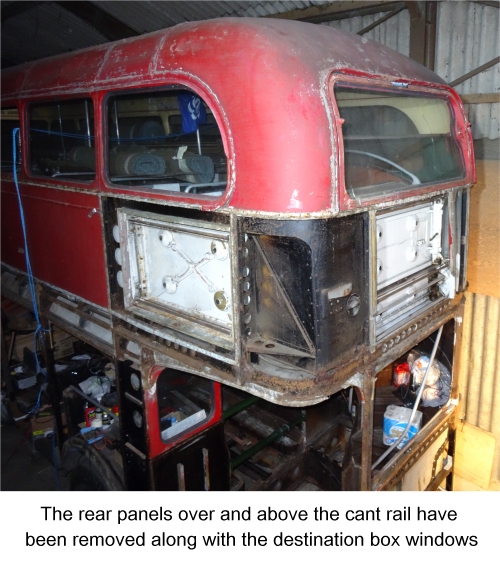 The next goal is to empty the upper saloon which is being used as storage space. All of the seat cushions will be taken out and stored in the giant tarpaulin, wrapped up to protect them from dust and from damage. I also want to reduce the weight bearing down on the lower deck whilst the risers are replaced. The weight of a bus load of seat squabs, seat frames and other items adds up.
Another shopping trip was undertaken as well, obtaining a replacement bonnet that is better than the current one, brand new lower (slightly curved) outer panels, a brand new under-canopy window, various pieces of curved and shaped wood, a battery bay, a rear emergency window, pieces of trim and other essential parts.
Posted by RT3316 at 23:05