Stepping up a gear

The expression "many hands make light work" is absolutely true. Working on a restoration may be therapeutic, but doing so alone is not conducive to progress when you have set an aggressive timescale. The risk of increasing the amount of work that is being done is that you forget where things are supposed to go, so putting it all back together might become problematic. The upside is that it becomes more economical, more manageable and morale boosting as you get whole sections dealt with. This bus was a rust bucket, which is not that uncommon. Various parts have suffered from water ingression - fitch plates (they go from the edge of the upper saloon floor to the outer panels and cover over the lower saloon lights) and coving panels in particular. These have simply not been dealt with for the past forty-odd years or have been covered over without being treated. As these are all above head height, every time you hit a part of the bus with a hammer, a shower of rust would fall down. In much the same way as a dentist we have rooted out the decay. In the days of Aldenham they used to go around marking pieces with chalk that needed replacing - we're almost the opposite - if we find something that is good, it gets a label on it that says 'GOOD'. We haven't had to write too many of those. But as per the advice I was given, everything that we have taken off has been labelled. Lots of photos have been taken so that they can be referred to.

In the last update we had moved to the front of the bus and started removing parts there. One of the reasons for this was so that we could use the space directly in front of the bus for storing seats and seat frames, as these were all being stored upstairs. We applied rust treatment to all of the exposed areas on the front of the bus that had surface, non-severe or non-structural rust. We then moved all of the contents from the upper saloon out and went to town up there. The inner and outer front domes, all the seat frames, trim and cork tiles were removed, as can be seen below. 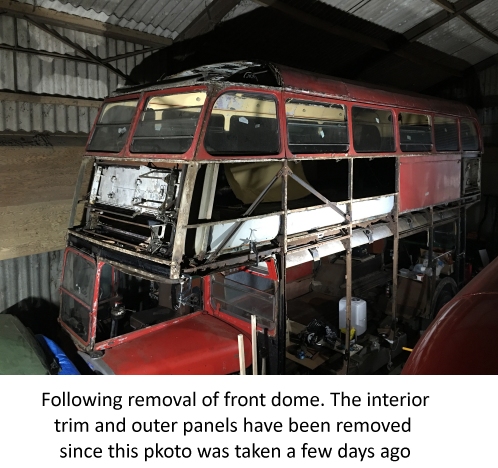 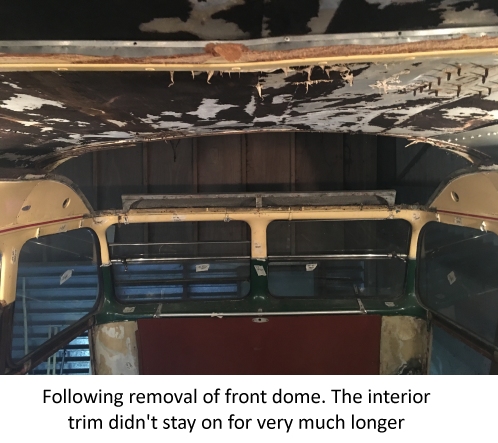 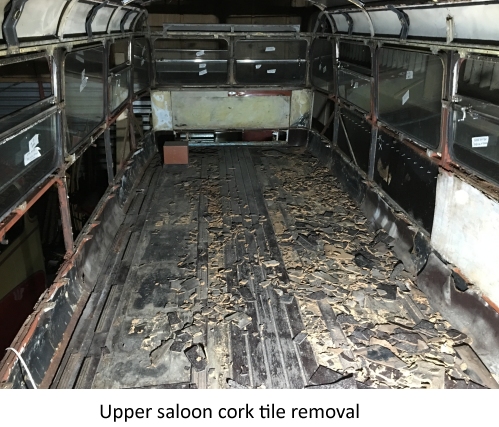 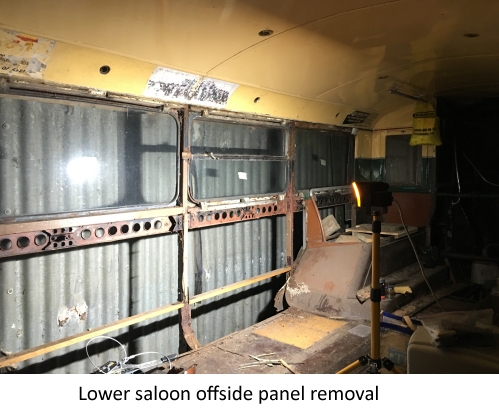 What is not apparent from the photos is the removal of all the offside trim and many of the offside panels. This has been achieved using a ladder in the confines of a gap that is less than three foot between the bus and the side wall of the building. All of this work will help to alleviate the weight constraints when the riser is fitted, which is still outstanding. However, this period has been making good use of hard working volunteers who won't always be available. With their time being productive, considerable progress has been made which keeps the aggressive target of restoration completion by next year a possibility. Watch this space for further considerable progress in the next restoration update (I know what is coming up, but I'm afraid there are no spoilers - you'll just have to wait for it!)