18 months into the restoration and I'd rather be further along than I am. It has been a steep learning curve and there have been some hurdles - the riser had to be replaced (and I had to do it myself) - all of the waist rails needed repairing or replacing - almost all of the waist rail brackets needed replacing - the pillars needed repairing - the floor channels all needed replacing, along with the brackets that hold them on - the inter-deck brackets needed bolstering with a new repair link that I had to have made - the front wing was badly corroded and needed extensive repair - the front bulkhead needed major repair in one section - the platform was non-existent - the back bar transpired to be a failing flimsy repair job and had to be replaced. It certainly has been a rocky road and there is no such thing as 'a quick bit' or 'an easy bit'. Everything takes time and effort. 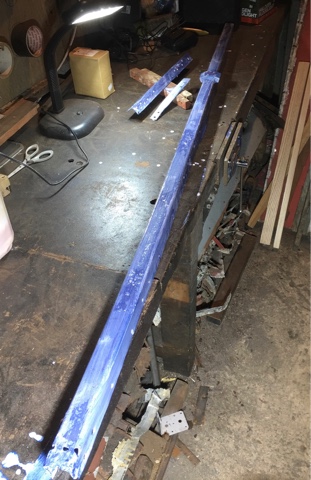 Repairing and treating a pillar (both sides)

Having now parked the platform and battery crate (both virtually complete), I found myself unable to get to the bus much due to other circumstances, so opted to carry on with some work from home. The front wing was badly corroded on the corner and had a chunk cut out of it by a previous owner, in order to add some bolts to secure an aluminum substitute for a waist rail for bay 1. It was a disaster and the oversized bolts even failed to secure it properly. Consequently, I had my work cut out in repairing the wing. First of all it needed to come off the bus, but that is easier said than done. The fuel pipes and other pipes and cabling pass through an opening on the inside of the wing and then again through the bottom of it. As the bus needed to remain mobile, I couldn't (and didn't want to) remove the pipes and cabling, so the alternative was butchering the wing, which I did carefully and thoughtfully with a plan in my head of how to repair the damage. That I have successfully managed to do with a couple of repair links that I have made, that I can bolt into place once the wing is fitted, thus ensuring the the strength and integrity is maintained. 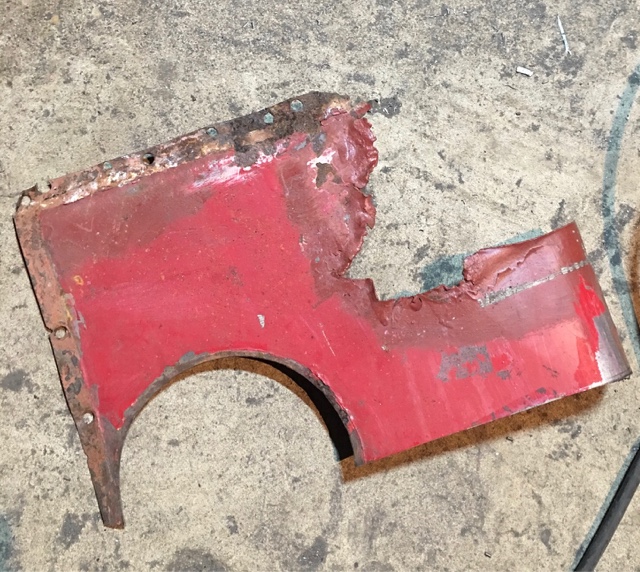 The damaged wing section cut off

Repairing the wing was easier than I expected. I started by measuring and creating a card template. I then cut off the bad section by determining a line that passes halfway through the side light. The new section was cut with nibblers according to my template and bent at the edge by hand using a vice and a sledgehammer (just the handle to bend around). The curve of the edge of the wing was almost spot on at the first attempt and just needed a little adjustment. My newly acquired welding skills were put to use and I welded a cutoff strip on the rear face to add some strength. I created a tool to flatten the buckled edge of the wing, using a vice with the handle replaced by a short bolt and nut that fit inside a large socket. The air socket wrench is then used to tighten and loosen the vice - a pneumatic press of sorts. It works a charm, so a big pat on the back for me (or it would be if my arms didn't ache so much).

With the edge flattened out, I turned to Isopon P38 to fill the dips and imperfections. That takes a day to properly harden. The next day I would sand the P38 down and then apply some more. This continued every day for well over a week. At one point I etch primed the wing, but still wasn't happy that it was a s smooth as a baby's backside, so rubbed down and filled again. Finally all parts of the wing were good enough to park it (as virtually finished). In my photo I added the front mudguard to add context, but whilst that is brand new old stock (never used), it needs some preparation itself. 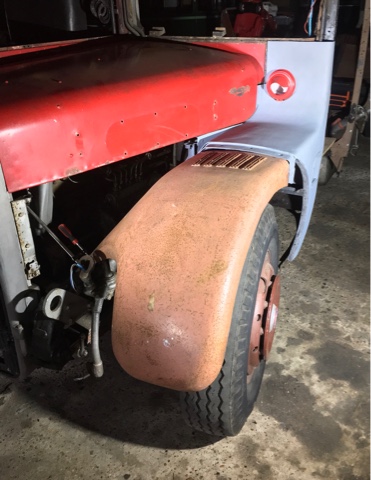 Next steps are finishing off waist rails, waist rail brackets, pillar feet, repairing pillars and fitting floor channels. They can't all be fitted yet, but I have made a start by repairing two pillars and I'm putting together floor channels and their brackets. Once these parts are fitted, I can complete the structure for each bay. There won't be any windows or walls going back in anytime soon, but with a solid frame, coving panels and flooring can be added and the repair links to support upstairs can go into place.