The Summer Holiday season is over and the nights are drawing in again. My focus switched to the driver's step, the panel that it fits in and the structure that supports it. The absence of the step was not only making it difficult for me to get into the cab, but also anyone else who needs to move my bus. To save on repetition, the next section is an update posted to Facebook. 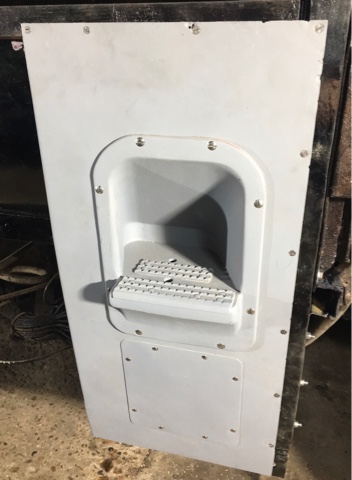 This panel took in excess of 60 man hours to do; Ken sandblasted and prepared the actual step; I cut off the bottom fifth of the panel and welded on a new section that I made from an old fluorescent light fitting. I finished it off with some Isopon P38 (duly sanded) and then Ken etch primed the whole section and fitted new screws. I had to create new wood framing from scratch and rust treat and refit the supporting metal brackets. The bulkhead wood insert bracket had to be modified as it was not an original and was too wide for the wood (more welding). That bracket was welded to the new bulkhead lower channel and both were treated to prevent rust. The parts underneath and the wood were treated with black bitumen paint to resist the effects of water that will get thrown up into this area (the main reason for having to re-do so much of it). Finally, pre-drilling the hardwood for the panel securing screws and fixing it in place. 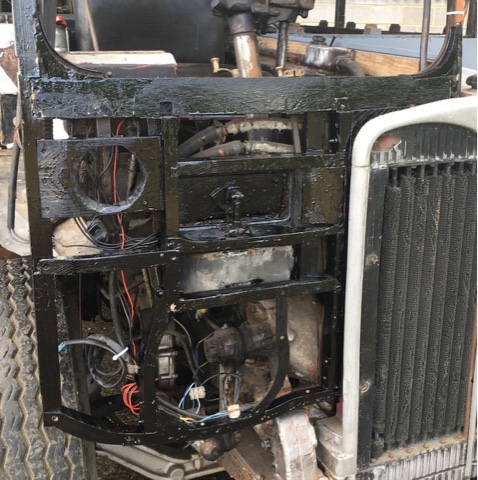 The next thing on my radar was cab wood, as I was getting a bit concerned about the risk of cab wood pieces already prepared being accidentally broken. I was a bit surprised at how quickly I was able to finish off the pieces for the front of the cab, with the bandsaw coming in particularly handy. These were mostly a case of reverse engineering them from the bits that came off, which were old but for the most part, intact. The long, intricate corner piece was a brand new old stock that I sourced, which would have been hard to remake. After screwing and bolting it all together, it has been painted and awaits finishing off with the side cab wood pieces and refitting of the front/corner panel. I have some work to do inside the cab though before I close it up. I've also just got the wood to complete the rest of the lower panel wood supports and will be working on those too and a replacement front offside mudguard that needs a bit of tidying up. I think I need to clone myself.
Posted by RT3316 at 20:16