This week was the week when I realized that since before I even owned the bus, it had collapsed. How could I possibly not have known before now? I’ve known for some time that something was not right on the near side. The inter deck brackets were so badly corroded that I had to create some support pieces, in much the same way that London Transport dealt with unforeseen issues. This week was when it became glaringly obvious just how serious the situation was. 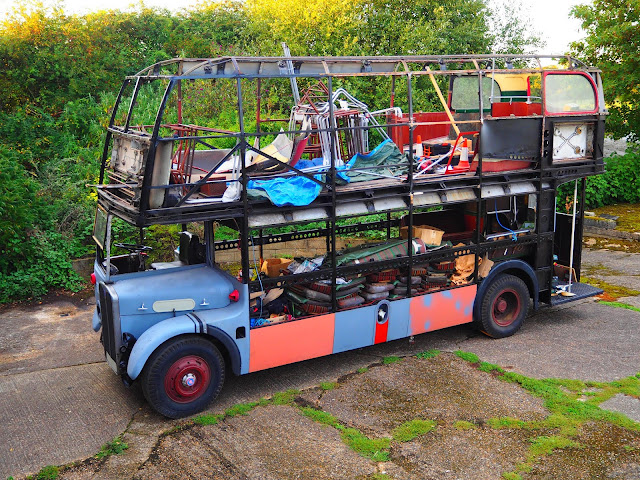 I’d been working my way along the upper saloon restoring the near side framework one bay at a time. The bay over the canopy is what I call bay zero, then there is the front bulkhead at the front of bay one and then bays two, three and four (which is over the rear wheels), rear bulkhead and bay 5 (over the platform). I had got as far as completing bay 3 and found that it was two inches (50mm) lower than bay 4. That’s not a small margin – that’s a cliff edge.

I could see that the lines were not straight, but couldn’t work out where it was going wrong. So I had a cup of tea and it helped me decide that I needed to create a plan of the framework, measure it all and then work out what was going on. Only when it came to analysing it did it become clear that each of bays zero through to three had collapsed on the near side – the off side was okay. As I worked my way forward along the nearside, the amount that the upper saloon had dropped got worse. When I bought the bus, it looked as though it needed a bit of work, but it looked fundamentally sound (apart from the lack of a platform). It was a wreck. 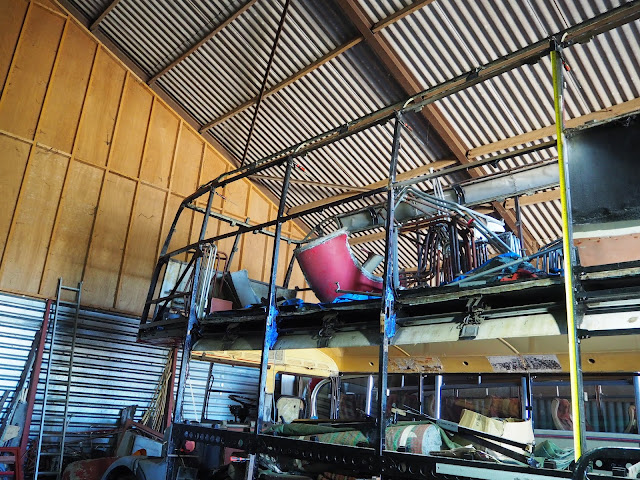 Today I set about fixing it. I labelled all of the timber from the waist rail up to the upper saloon windows and removed it all. It was a humid day and would have been great to work outdoors, but I needed to do this on a flat and level surface, so that meant working indoors. Bay 4 and 5 are okay (they contain considerably more metal keeping them in shape), so I started with bay 3. Each pillar had a marker (angle bracket) clamped to the top of the upper saloon window framework, all in the same position. The upper saloon window framework all measured up correctly, and the lower saloon floor channels, foot brackets and waist rails similarly (most of the lower saloon parts have been replaced). I had two constants and just needed to ensure that the upper saloon was lifted to get the same height for each bay. I make it sound simple, but there is a complication. The reason for the collapse is the corrosion of the inter deck brackets, which means that the floor/ceiling is lower than it should be. So I had to fix the upper saloon framework to the upper saloon floor / lower saloon ceiling and then lift the floor / ceiling until the correct overall height was achieved. All on my own. 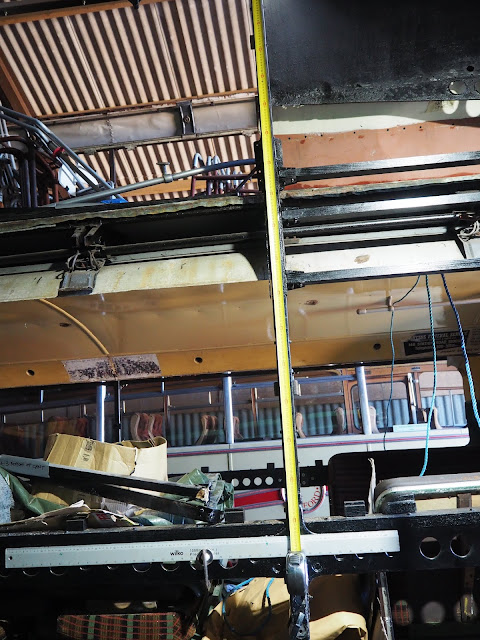 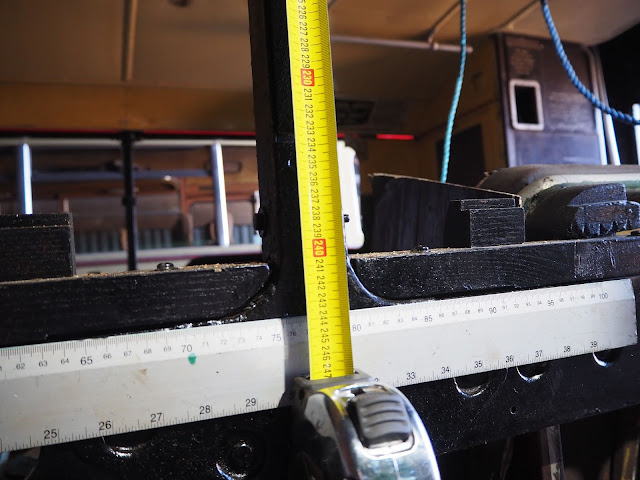 I carried out this procedure for each pillar to raise each bay. The canopy was a little more tricky, but I’d already bolstered the near side support over the canopy and added new support for the front corner of the floor upstairs. This meant I was able to perform the work by lifting the canopy and adding support to the pillar and then lifting the floor / ceiling at the front of bay 1 and adding a support bracket to keep it at the correct height. All clamped together with marine grade steel M8 nuts and bolts with steel box channel in a vertical position to take the downward force in excess of the original design requirement. This bus has earned the right to be called a bionic bus. We have the technology, we can rebuild her.
The end result is a straight line along the upper saloon window framework and an uncollapsed bus. The next step is to reinstate all the timber. Some of the fixing holes for the brackets that support the timber are going to be in the wrong place, so I know that I will need to do some drilling. But the remediation had to be done and it has been. And now I’m kna whacked. 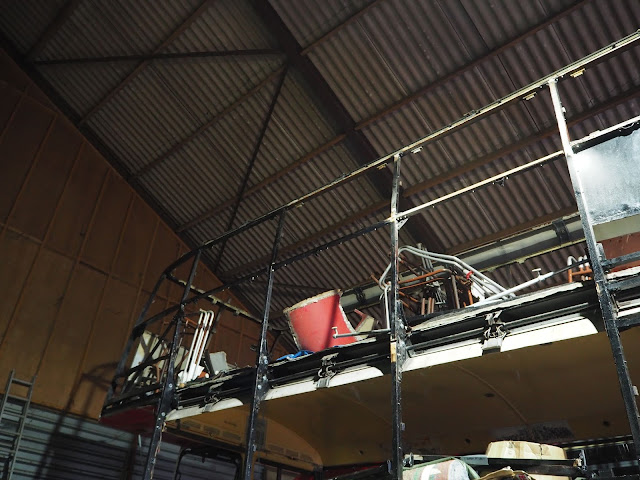 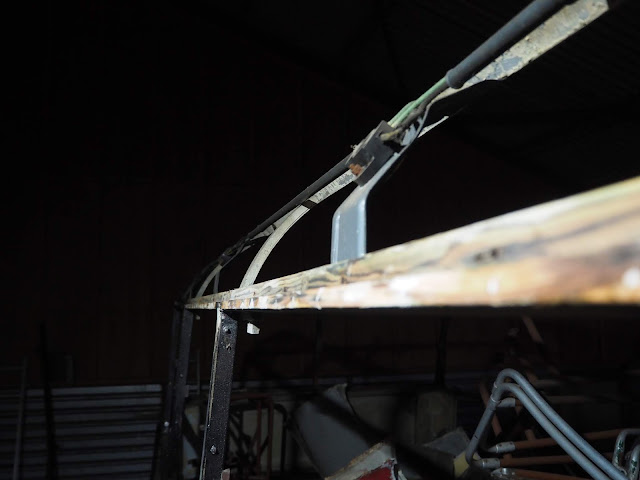 In the last update I mentioned that I’d done some repairs on the platform window but didn’t include a photo, so I’ve added a picture of that. This repair took 6 to 8 stages of filling and sanding before being primed. This area corrodes on all RTs and I've seen much worse than mine! 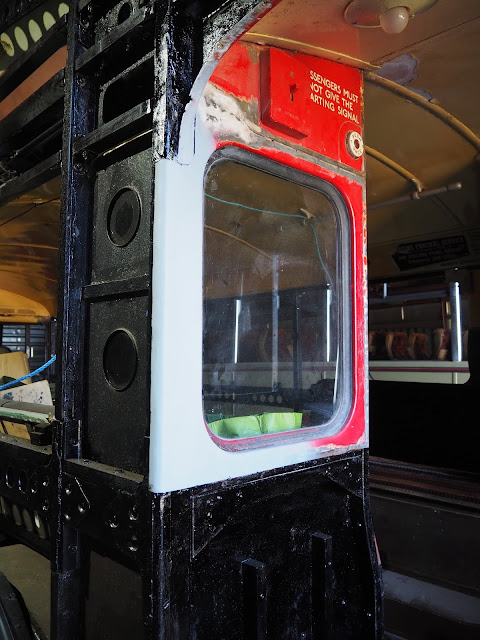