Doing a restoration like this is highly likely to end up with inevitable consequences. You’re going to have accidents and sometimes those will come along in twos or threes. Accident time has come around again. Just two this time and one of those was not my own fault.
Starting with the more serious one, I was carrying one end of a work table when a leg of the table caught a carrier bag of clamps which then got in the way of my feet, causing me to stumble. To remediate the issue, for some reason I thought it was a good idea to kick the carrier bag to get it off the table leg. Bear in mind that we’re still moving with the table at this stage - my foot got caught on the carrier bag (which was now wrapped around the table leg) and I begin the totally ungracious fall backwards onto the concrete surface. All that was missing was someone crying out ‘timber’ and (thankfully) a phone or camera recording it for future embarrassment. The concrete did not budge as my buttock met with it; my leg twisted and my elbows and shoulder found the ground too. No grazes, no blood and fortunately no broken bones.
My tumble impacted my ability to get on with work on the bus. You need to know when to ease up and allow your body rest when it tells you that it needs it. I hobbled around for several days ensuring that I didn’t put much weight on the injured leg and as the pain subsided, I became aware of a sharp digging pain in that foot. Accident number two. Examination revealed that a splinter of wood had lodged itself in the ball of my foot (sometimes stuff gets in your shoes, it can’t be helped) and I had been walking around on it because the pain from the twisted leg was masking the pain from the splinter. Not much fun.

However, these things happen and you have to carry on, albeit at the reduced pace. Time to stop whinging at fill you in on what you came here for. 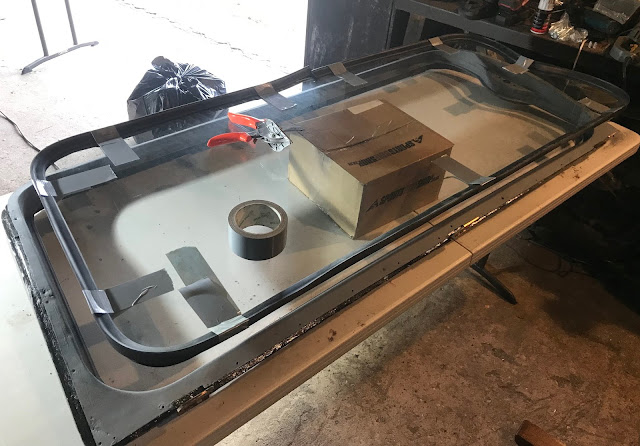 The emergency exit I was working on has proven to be a right pain in the bit that cushioned my impact with concrete. After rebuilding the timber, I married it up with the bus and it did not fit. I had to sand it down and connected it with the hinges and even without the glass or frame, it almost ripped apart when put through the opening action. It also was looking like it would rip the wood on the bus apart. So I opted for a better way to connect the hinge to the window and also to the bus.

I got some high tensile countersunk bolts to replace the wood screws normally used. I also got some weld nuts and made some steel plates to fit behind the wood in the window frame. There’s not a lot of room, so the plate had to be recessed into the wood and the bolts could not protrude beyond the nuts. Screws were added to hold the plates in position for when it becomes necessary to remove the window in years to come. 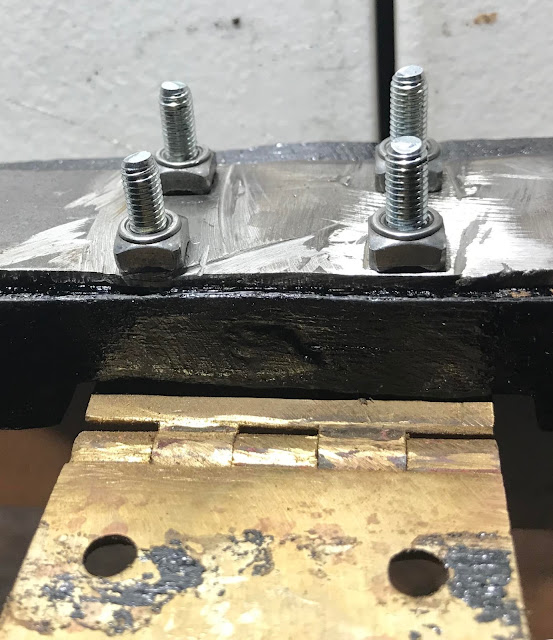 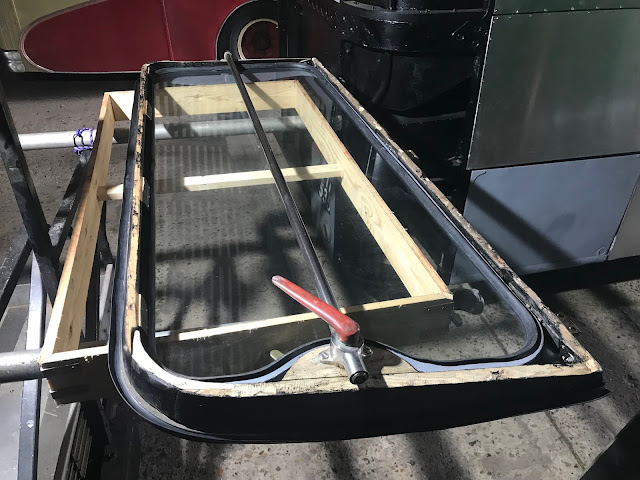 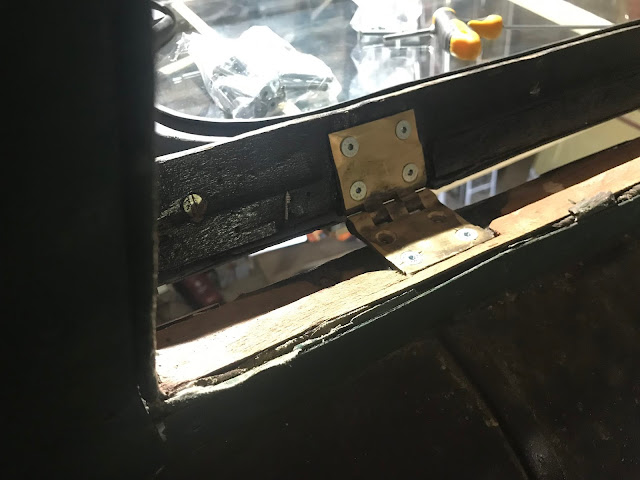 There are three hinges securing the emergency exit to the bus. I drilled through the centre one, which allows bolts to be secured with a nut from inside the rear display unit. The other side of the others will be obscured by panels, so I fitted insert nuts in the wood. These screw into the wood but provide a thread to hold the bolts. All lined up and tested and fitted with the aid of the cherry picker.

Well, nearly. It doesn’t want to line up nicely and needs a bit more adjusting. For now, I have secured it and will give it some more love when the weather improves. It is nearly there, bar the final touches. The rain trim can wait until I have finished with the window. 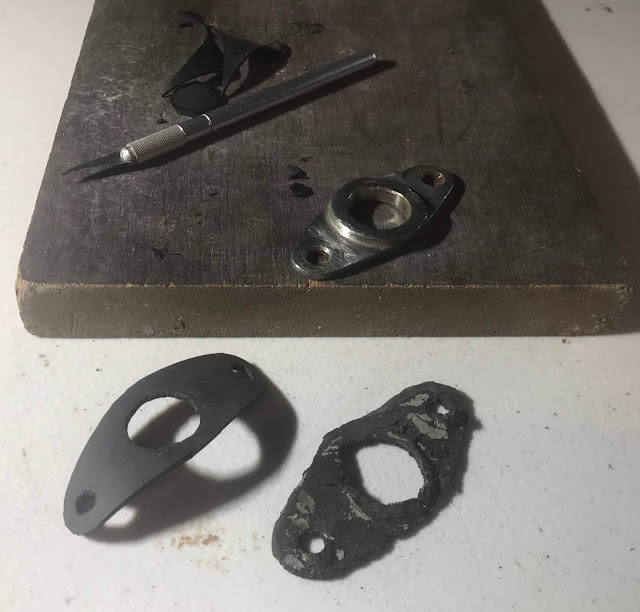 Under the canopy received some attention. Finding the parts was the first hurdle; some refurbishment was needed and then refitting (which is always more troublesome than the word implies). But it looks significantly better. The cant rail around the canopy was refurbished, primed and fitted. An extra piece of timber was added behind it to add some additional support where needed for this now delicate part.

More panels were added. The weather dictates what you can progress with and so panelling can take quite some time. But each panel added is one panel closer to completion. My fussiness though means that panels are also coming off and adjustments made or panels remade. I envisaged this; if I do something that I think is not as good as it could be but is probably okay to everyone else, I move on and see if it bugs me enough to do something about it. It usually does. I constantly get told that it’s unnecessary, but it’s necessary for me. We all have our quirks. A lot of fixing screws are coming out so that their holes can be countersunk further, allowing the screw heads to be more flush. 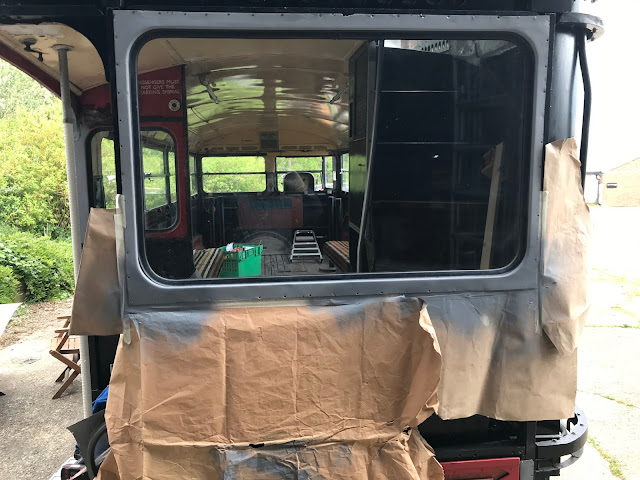 I updated the website when the weather turned a bit iffy (www.rt3316.com). It needed refreshing as some of it was getting a bit outdated as most of the time it is just the blog and Facebook page that get new content.

Key goals in the coming weeks are to complete the panelling and destination displays and work through the remaining external snagging issues. 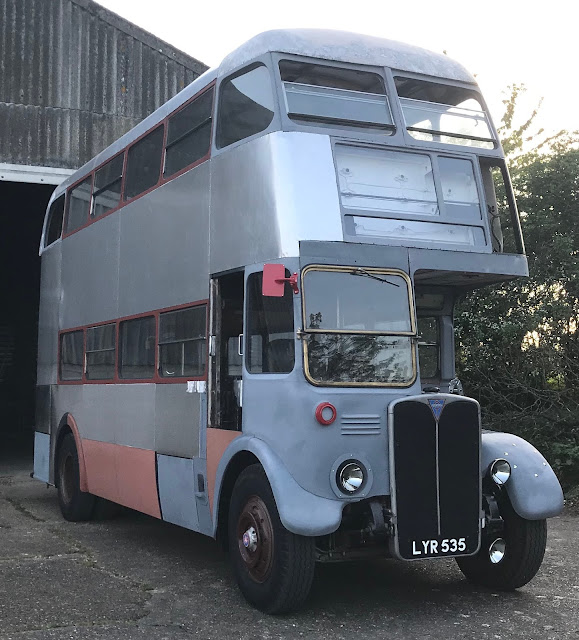